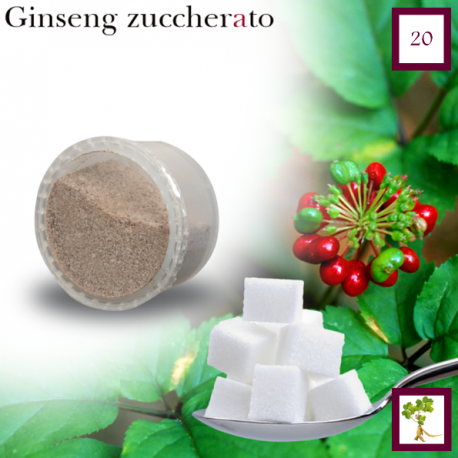 It is a mix soluble coffee powder flavored with ginseng sweet.

The word ginseng means many species belonging to the family Araliaceae. In Chinese medicine drugs derived from these plants, consisting of roots, it looks back on a long tradition, made of different uses. Ginseng The name comes from the Chinese word "rensheng" meaning man, most likely choice to emphasize the anthropomorphic structure of the root.

Ginseng is considered an almost universal remedy, the ginseng was mainly used against aging, gastrointestinal disorders and as an aphrodisiac prepared and revitalizing.

The extraordinary reputation as drug-panacea and the mysterious charm of his Eastern origin have contributed to its success in our markets.

Initially driven by their supposed ability to awaken dormant desires, extracts of ginseng are now found in many food supplements, largely destined for convalescents, athletes and the elderly.

So it is no coincidence that ginseng is considered the world's most used herbal product.

The best known species are those of Asian origin (Panax ginseng cultivated in China, P. schinseng or Chinese ginseng, P. pseudo-ginseng that grows in eastern Nepal and nell'Imalaia, P. notoginseng cultivated in China, P. japonicus, P .vietnamensis), American (Panax quinquefolius equivalent to Asian ginseng for use, appearance and composition) and Siberian (Eleutherococcus senticosus for chemically different but similar therapeutic properties). Among all, the species most used and studied is the Panax ginseng.

The virtues of ginseng are attributed to different components present in its roots. Apart from a good content of vitamins, essential oils and polysaccharides (panaxani) note is the presence of triterpenoid saponins called ginsenosides and considered the active ingredients of the drug.
Once past the initial enthusiasm for his overt aphrodisiac, however, still waiting for scientific confirmation, we have followed numerous studies to investigate the real healing properties. From these studies they reveal arguments have proposed the use of ginseng in the treatment of various conditions, such as Type II diabetes, insomnia, gastritis, low blood pressure, stress and fatigue.

Extracts of ginseng were also attributed antioxidant effects, antipyretic, cholesterol lowering agents, probiotics, radioprotective, anti-cancer and anti-inflammatory. Many of these effects, demonstrated only in animals, are still awaiting scientific confirmation; Furthermore, the quality and the neutrality of the studies conducted in the countries of East Asia has been questioned. Another problem stems from the enormous economic interests that revolve around this plant and pushing for the recognition of its supposed curative properties. All this explains why there are different opinions on the subject, ranging from excessive enthusiasm all'esagerato skepticism.

Ginseng is traditionally considered a drug tonic or adaptogenic (synonymous technical), as useful for strengthening the immune system and improve the physical and mental capacity. Several animal studies have shown that ginseng influence the hypothalamic-pituitary axis by increasing the release of ACTH, a hormone that induces the release of adrenal cortisol or "stress hormone". Cortisol improves response to psychophysical stress, promoting the degradation of glycogen, muscle protein and stimulates the central nervous system function.

The alleged aphrodisiac effect of ginseng appears to be related to its ability to increase the release of nitric oxide from endothelial cells of the corpora cavernosa of the penis; the consequent vasodilation would get an erection more vigorous. Among the various species, the Chinese medicine associates the major aphrodisiac properties to red ginseng, whose color is due simply to the treatment of the root with steam (120-130 ° C for about 2-3 hours) and the subsequent drying.

Numerous studies show the benefits of ginseng in diabetic mice, but there is an equally large number of research on men confirming its hypoglycemic properties (ginsenosides appear to promote the synthesis of pancreatic insulin and increase the production of glucose transporters in the liver; the panaxani (polysaccharides) seem to decrease the synthesis of glucose in the liver and increase its use in various body tissues).


Effectiveness
Improvement of psychological functioning: effective, although there are some studies in the opposite
Increase athletic performance: ineffective
Strengthen the immune system: effective
Hypoglycemic: Action modest, extensive scientific evidence in laboratory animals, limited in humans

Side effects
Symptoms such as nausea, diarrhea, euphoria, insomnia, headache, hypertension, hypotension, breast pain, vaginal bleeding and pressure changes, may appear to the ingestion of very high dose levels (15 g, that is 30-75 times higher than the recommended doses ). They were also recorded cases of allergy.

Interactions
Caution in the use of simultaneous ginseng and phenelzine [Nardil (a psychiatric drug)], warfarin [Coumadin (a blood thinner)], oral hypoglycemic agents, insulin, digoxin, hormones and caffeine. E 'contraindicated for those suffering from high blood pressure or bleeding.